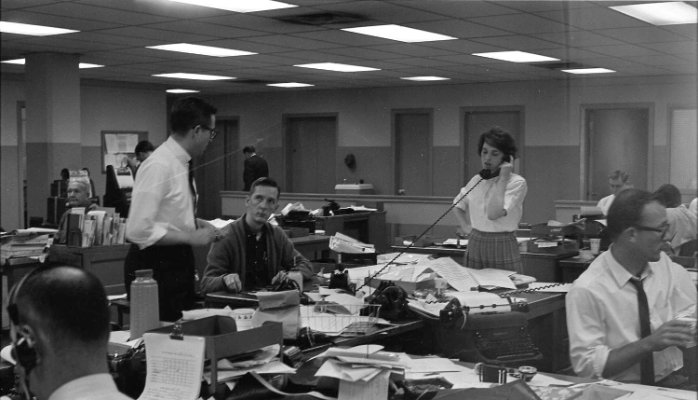 Sex, Smokes and Audio Tape… Tales From An ‘80’s Newsroom!

I recently reunited with the journalists I began my career with at ABC radio news several decades ago.

As we talked and laughed, reminding each other of the real characters we worked with – many of whom died prematurely from alcohol and tobacco related misadventures, we remembered our workplace – almost unimaginable today.

We recalled the clattering typewriters, a tea lady who brought the trolley around mid afternoon, smoking sub editors who headed for the pub at 9am, a telex machine delivering the overseas wires, and a heavy and very cumbersome tape recorder and microphone that accompanied you to every story.We remembered the surprise on the face of the local milkbar owner as we would dash in from a crime scene, and ask to use the phone – deftly unscrewing the receiver end of the rotary telephone, attaching a pair of alligator clips to send back the audio to accompany the story.

The introduction of computers saw us strike until a “VDT (visual display terminal) allowance” was introduced, and we laughed ‘til we cried recalling some of the early versions of email which saw messages inadvertently sent to the people they were complaining about.

As an early bird, my preferred shift began at 5am when I felt I had a lot of sway over setting the news agenda for the day.

My shift was overseen by a twinkly-eyed Irish sub editor who only allowed us to use the word “launch” in our copy if we were referring to a ship. He taught me the proper use of the corporate singular – a rule that has remained with me and one that plagues my staff even today.

Pre internet, my main tool of trade was the White Pages, and it was common practice to wake many families with the same surname before landing on the right victim/spokesperson/official.

In those days I owned a well thumbed contact book which every journalist jealously guarded. These contained the home numbers (unlisted landlines) of government ministers and celebrities. My most coveted contact number was the one directly into Buckingham Palace. I recall it was gifted to me by a visiting British Paparazzi during a visit by the Queen, and I never had cause to use it. But still…

In those days, there were so many expressions and concepts not yet part of our vocabulary; “infrastructure”, “band width”, “multi platform” and “politically correct”.

Cultural and religious differences were mocked, women were groped, office affairs were common, and no-one ever considered taking legal action. Quite the contrary in fact – I recall my own short stint as a smoker prompted by the realisation that I could get the ear of the news editor to pitch my story while he was outside having his smoko.

As an ABC reporter, what we missed out on in terms of a clothing allowance and lavish Christmas parties, we made up for in self worth knowing we had an additional dose of credibility and integrity working for the government funded network.

I recall a listener calling to praise our service – Apparently, using the 7AM news bulletin as a guide resulted in the perfectly boiled egg.

Today, most of my former colleagues work within the communications industry –assisting corporates to shape the stories they hope will make news… or helping form the messages to make it all go away.

We marvel at the way today’s reporters are under such pressure to file – and update – their stories several times each day across several mediums.

We despair at the increasingly stretched resources dedicated to news services – resulting in time poor journalists who are more willing to accept the headline on the media release, and less likely to probe for the bigger story.

But at the end of the day, whilst the news cycle, the technology and the delivery mechanism may have evolved, the fundamental elements of what makes a news story remain absolutely the same.

It’s still all about the scandal, the crime, and the controversy.

Until technology finds an alternative to the office water cooler, workers will continue to gather during their break to discuss stories of human failure and cheer on the downtrodden little guy over the big, bad corporate.

Journalists will continue to report the highest score, the celebrity downfall and the parliamentary expense scandal.

The role of the storyteller will continue – however the newsroom of the future evolves.

Back to top
Copyright © 2016 NewsFlash Media